View cart “Coming Home to the Third Reich” has been added to your cart.

Coming Home to the Third Reich

Return Migration of German Nationals from the United States and Canada, 1933–1941

During the 1930s, Germany’s industrialization, rearmament and economic plans taxed the existing manpower, forcing the country to explore new ways of acquiring Aryan-German labor. Eventually, the Third Reich implemented a return migration program which used various recruitment strategies to entice Germans from Canada and the United States to migrate home. It initially used the Atlantic Ocean to transport German-speakers, but after the outbreak of World War II, German civilians were brought from the Americas to East Asia and then to Germany via the Trans-Siberian Railway through the Soviet Union. Germany’s attack on the Soviet Union in June 1941 ended this overland route, but some Germans were moved on Nazi ships from East Asia to the Third Reich until the end of 1942. This book investigates why Germans who had already established themselves in overseas countries chose to migrate back to an oppressive and authoritarian country. It sheds light on some aspects of the Third Reich’s administration, goals and achievements associated with return migration while also telling the individual stories of returnees.

Grant W. Grams is a historian, writer and lecturer specializing in German and migration history. He lives in Edmonton, Canada. 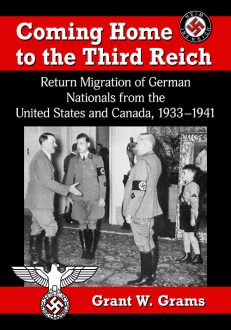 You're viewing: Coming Home to the Third Reich $49.95
Add to cart