How the Drug Trade Destroyed Peace

This history of Colombia’s illegal drug trade—and of the extreme violence it created—describes how in the late 1960s narcotics traffickers from the United States convinced Colombians who had no previous involvement in the drug trade to grow marijuana for export to America. By the early ’70s, foreign (mostly American) traffickers began requesting cocaine.
This book focuses on the decades of crime and violence the illegal drug trade brought to Colombia and how this social upset was ended in the early 2000s. Six chapters detail the Medellín and Cali cartels’ war against the Colombian government, the revolutionary guerrillas’ war against the government, the war that paramilitary groups conducted against the guerrillas, and the way in which the government finally put a stop to the cartel-financed bloodshed. In conclusion, the author assesses Colombia’s progress and prospects since the end of the violence claimed the lives of some 300,000 between 1975 and 2008.

James D. Henderson specializes in modern Latin American and Colombian history. He taught at Coastal Carolina University until his retirement in 2014. He lives in Conway, South Carolina.

Acknowledgments vi
Introduction: The Left and Right of Violence and Illegal Drugs in Colombia 1
Song of Love (Between My Country and Me) by Luz Marina Posada 10 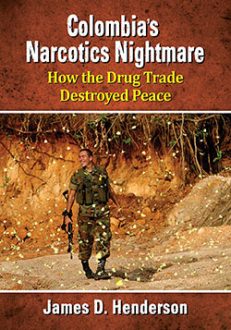