Elizabeth Foxwell, an Agatha Award winner, is managing editor of Clues: A Journal of Detection.

Murder and the Supernatural: Crime in the Fiction of Scott, Hogg, and Stevenson      10
Christopher MacLachlan
The author traces the development of crime fiction in the work of Sir Walter Scott, James Hogg, and Robert Louis Stevenson, arguing that Scott shows murder as embedded in culture and disruptive of community but contains the disruption within an Enlightened rationality, whereas Hogg explores its impact on the community, the individual, and nature. Stevenson also shows the traumatic effect of crime, but his focus on the individual turns Hogg’s supernatural into the psychological.

Dick Donovan, the Glasgow Detective, and His Creator, James Edward (Joyce Emerson Preston) Muddock      23
Bruce Durie
J. E. Preston Muddock’s “Glasgow Detective,” Dick Donovan, was the true progenitor of the protagonist-narrator genre of serial detective fiction, hugely popular before Arthur Conan Doyle and Sherlock Holmes eclipsed him. Extant biographies of Muddock are wrong or misleading in almost every regard, largely thanks to his own inventions and obfuscations.

Ian Rankin and the Ethics of Crime Fiction
Eleanor Bell      53
Writer Ian Rankin has suggested that crime fiction should invoke a self-conscious interrogation of the dark underside of society, that readers should subsequently be drawn toward an ethical engagement with the world around them. The author considers the implications of this ethical potential with reference to Rankin’s depictions of post-devolution Scotland.

“A Duty to Care”: Denise Mina’s Garnethill Series
Robert P. Winston      64
Social institutions like the medical professions and the police should protect women, but Denise Mina’s Garnethill trilogy demonstrates how such structures actually victimize them. Mina uses private investigations by Maureen O’Donnell to explore more widely applicable strategies of resistance to violence in both the home and society at large.

Denise Mina, Ian Rankin, Paul Johnston, and the Architectural Crime Novel
Peter Clandfield      79
Denise Mina, Ian Rankin, and Paul Johnston treat Scotland’s dysfunctional housing schemes and other flawed urban developments not only as apt settings for crime-based narratives but also as forms of crime in themselves. These authors redevelop the crime novel to critique grandiose architectural and political plans for Scotland’s future. 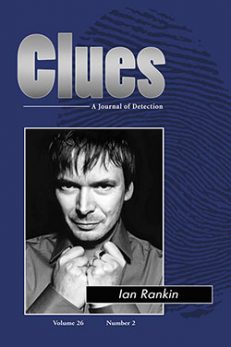