Chuck Palahniuk, America’s premier transgressive novelist, enjoys a tremendous readership. Yet he has not necessarily been embraced by critics or academics. His prose is considered vulgar by some, but his body of work addresses a core motivation of 21st-century life: individual self-empowerment. Palahniuk writes about what it means to be on the outside looking in, revising familiar narratives for a contemporary audience to get at the heart of the human condition—everyone wants a chance to win his or her fair share, no matter the cost. In Haunted, Snuff, Pygmy, Tell-All, Damned and Invisible Monsters Remix, he confronts marginalization and disenfranchisement through parodies of various works—The Decameron, The Inferno, Are You There God? It’s Me, Margaret, The Elephant Man—as well as Hollywood history, 1970s karate films and the porn industry. This comprehensive study of six novels refutes criticism that Palahniuk’s goals are to shock and sensationalize.

David McCracken is a professor of English at Coker College in Hartsville, South Carolina. His areas of expertise are American literature, contemporary fiction, and rhetoric and composition. 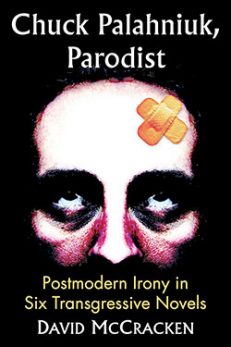