The Voyages of the Pandora and Matavy

Popular films about the Bounty mutiny only scratch the surface. This rebellion on a British vessel in 1789 sparked the voyages of H.M.S. Pandora—dispatched to track down the mutineers and return them to England for court-martial—and the Matavy, a schooner built by the mutineers in Tahiti. This is the first book to include eyewitness accounts from five men who endured these voyages. Presented in overlapping, chronological order are the first publication of a narrative by a member of Matavy’s crew, who vividly describes a desperate struggle to survive with meager provisions among islands filled with hostile natives. A previously unpublished poem by an anonymous sailor on Pandora recounts the ship’s sinking, the survivors’ tortuous journey to the Dutch East Indies, and their return to England. The captain’s unedited statement on the loss of Pandora is included and appendices summarize the Bounty and Pandora courts-martial and the later history of each narrator.

Donald A. Maxton retired from a 35-year career of writing, editing and designing newsletters, magazines, brochures, and educational material for corporations and hospital systems. He has written and edited three books and eight articles about the mutiny on H.M.S. Bounty, and delivers presentations on the subject. He lives in Springfield, New Jersey, and New York.

Edited by Donald A. Maxton

• “It is great to read through this well-researched new publication and revisit this wonderful part of the tale…helps shed more light on an important part of this story that has been overlooked by authors, playwrights and film makers…excellent illustrations…reading this book has been a joy”—The Mariner’s Mirror

• “Mr. Maxton, seeing a void that needed filling, has produced the quintessential non-fiction volume filled with the words of five of the eyewitness participants in this heinous crime….this is a scholarly book, which should be of interest to any who want the ‘real’ story”—Sea History

• “An excellent addition to the historiography of the Bounty mutiny, its often-overshadowed aftermath, and the exploration of the South Pacific in the late-eighteenth century. Maxton skillfully integrates the unique surviving accounts from the voyage into a chronological timeline, offering a chance for scholars to compare official reports, Pandora crew recollections, and Bounty mutineer accounts of the same events side-by-side. This unique combination of perspective helps create a more detailed and objective accounting of the voyage of Captain Edwards and his men, making it a worthy read for those interested in the Bounty or the South Pacific in the early years of European exploration.”—The Northern Mariner

• “Masterfully edited…The ‘voices’ behind these accounts make for compelling reading. Maxton has brilliantly woven together the first-person narratives. The chronological order of these narratives is one of the strengths of this volume. When two or more eyewitness accounts discuss the same situation or experiences, Maxton includes all perspectives…This book has an audience wider than historians and scholars. General readers will be impressed by Maxton’s ability to craft and edit prose to create a stimulating read.”—The Journal of Pacific History

• “Chasing the Bounty is a compelling story; therefore, I wholeheartedly recommend it to all maritime historians.”—The Nautilus XII

• “This book is a must for serious students of Bounty.”—Nautical Research Journal

• “What Maxton has done is provided historians, students of history and others with an interest in these events and the Pacific, first-hand accounts from which they can then themselves consider in forming an impression of what actually occurred. To that extent it is a very valuable resource and a worthy addition to any maritime historian’s collection.”—Journal of the Australian Association for Maritime History 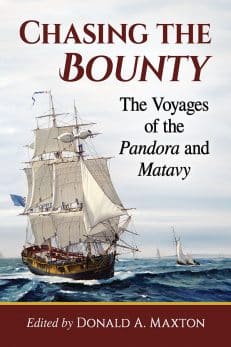