View cart “Charlotte Greenwood” has been added to your cart.

The Life and Career of the Comic Star of Vaudeville, Radio and Film

Charlotte Greenwood never intended to become a comedienne, but she was unfashionably tall at 5′ 10″ and her early aspirations to become a great dramatic actress eventually led her to the field of comedy. Greenwood, whose early life had taught her nothing if not how to be optimistic, stifled her disappointment and used her considerable skill to become one of the greatest comedic actresses of the early twentieth century.
Based on Greenwood’s unpublished memoirs, this biography presents a personal, detailed look at her colorful life. Beginning with her early years in Philadelphia, Boston and Norfolk, it relates her struggles with ill health, her social difficulties caused by her then unusual height and her realization of her ambition to become an actress. The main focus of the work is her career, which spanned more than 50 years and ranged from vaudeville to the dramatic stage and, finally, to films (during the World War II years she starred in Twentieth Century Fox musicals with Cesar Romero, Betty Grable, Edward Everett Horton, Jack Haley, Don Ameche, and Carmen Miranda). Her roles in a variety of works including The Passing Show of 1912, So Long Letty (both stage and film), and I Remember Mama are also discussed. Special emphasis is placed on her career-defining (and best-known) role as Aunt Eller Murphy in the 1955 film adaptation of Oklahoma! Charlotte Greenwood’s performance history, a list of her known recordings, and a filmography for her husband Martin Broones are also included, along with a collection of rare photographs and memorabilia.

Biographer Grant Hayter-Menzies lives in British Columbia. His works include biographies of Charlotte Greenwood, Princess Der Ling, Sarah Pike Conger, Pauline Benton, and Lillian Carter, along with the life of a dog, military mascot Rags of the First Division in World War I.

Appendix D: Shows with Songs or Scores by Martin Broones      238

“a first-rate biography…Grant Hayter-Menzies does his subject proud”—The Slide Area; “extensively researched”—Vancouver Voice; “a unique talent and an overlooked chapter in show business history, diligently researched and informatively written. Beloved Charlotte Greenwood has been brought back to life with candor and charm. A movie lover’s must-read!”—Rex Reed, journalist, New York Observer; “Charlotte Greenwood was a tough and bright show-biz cookie who broke the rules and wrote her own. Grant Hayter-Menzies chronicles her zig-zags, public and private, with remarkable passion and compassion, precision and perception. Those who only know Greenwood at twilight, essentially as sweet old Aunt Eller, are in for some happy jolts”—Martin Bernheimer, music critic, Financial Times, London. 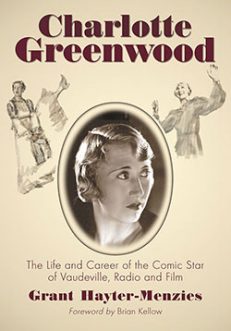