Personal Stories of Life on the Road and in the Studio

Rockabilly, a musical designation coined by Billboard magazine in the mid–1950s, is a rambunctious rhythmic style combining the liveliest elements of country, gospel, and rhythm and blues. Popularized by such performers as Elvis Presley, Buddy Holly and Ricky Nelson, rockabilly has been a major influence on the music of Bob Dylan, the Beatles and Bruce Springsteen (among many others).
This book captures the essence of life on the road and in the recording studio through interviews with many of rockabilly’s foremost artists. Among those sharing their experiences are Jerry Allison and Sonny Curtis of the Crickets, Sonny Burgess, Wanda Jackson, Glen Glenn, the Collins Kids, Charlie Gracie and Deke Dickerson. Also included are several rare publicity photos.

Journalist Sheree Homer ran her own music magazine, Rockabilly Revue, for two years. Since 2006, she has contributed articles to various publications, including Blue Suede News. She lives in Kenosha, Wisconsin.

Finalist, ARSC Award for Excellence
“Homer is an expert in the area of rock and roll roots music. Her books are filled with painstaking research, accurate assessments, and first hand recollections via interviews. This is an intelligent, insightful, fascinating examination of just what makes this music tick…highly recommended”—Examiner; “this book should definitely be part of your library”—Keep Rockin’ Magazine; “her interviews with these ’50s innovators result in fascinating insights into their creative energy bursts, as well as charming personal anecdotes. A satisfying read for any rock fan, it’s a must-have for rockabilly aficionados”—Pop Culture Classics; “a great book…heartfull tribute to rockabilly music and its performers…stunning”—Rock and Roll Revue Magazine; “a well constructed and literate salute to the music loved and cherished by many”—American Music Magazine; “your front and center concert seat to some hard-driving, classic music! Make this one a part of your music library!”—Echoes of the Past; “an informative read”—Now Dig This; “has encapsulated ‘why’ there is rock music. And more importantly, the people who REALLY made that happen…essential…Sheree Homer has written one of, if not ‘the’ best book on the subject of ‘Rockabilly’ music ever!”—DiscoveringElvis.com; “straightforward…interesting details. Bottom line. You’re gonna need this book”—Blue Suede News; “she has brought out a labor of love that is hard to put down…a valuable reference work that goes well beyond what has been published before”—UK Rock (England). 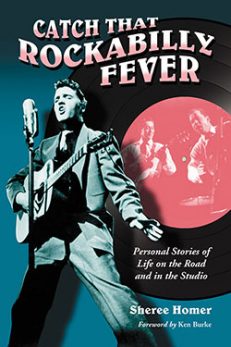 You're viewing: Catch That Rockabilly Fever $25.00
Add to cart