The 18th North Carolina Regiment in the Civil War

The 18th North Carolina Regiment has the dubious distinction of firing the volley at Chancellorsville, Virginia, that mortally wounded General Thomas “Stonewall” Jackson. This tragic accident has overshadowed the regiment’s otherwise valiant service during the Civil War. One of Robert E. Lee’s “fighting regiments,” the 18th North Carolina was a part of two famous Confederate military machines, A.P. Hill’s Light Division and Jackson’s foot cavalry. This revealing history chronicles the regiment’s exploits from its origins through combat with the Army of Northern Virginia at Hanover Court House, the Seven Days’ Battles, Cold Harbor, Petersburg, and other battles to its surrender at Appomattox Court House as a battered, much smaller shell of its former self. A roster of those surrendering officers and enlisted men and brief biographical sketches of those who fought with the regiment for most of the war complete this enlightening account.

James M. Gillispie is the division chair of Arts & Sciences at Sampson Community College in Clinton, North Carolina, where he has taught since 1999. He is the author of one other book on the Civil War and has been a featured speaker at the Museum of the Confederacy in Richmond, Virginia. 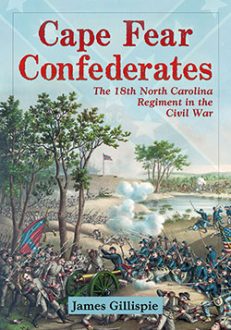