“Boys’ love,” a male-male homoerotic genre written primarily by women for women, enjoys global popularity and is one of the most rapidly growing publishing niches in the United States. It is found in manga, anime, novels, movies, electronic games, and fan-created fiction, artwork, and video. This collection of 14 essays addresses boys’ love as it has been received and modified by fans outside Japan as a commodity, controversy, and culture.

Antonia Levi is a retired professor of Japanese history and popular culture. She is the author of one previous book and numerous articles on Japanese anime and manga.
Mark McHarry is an independent scholar of both contemporary and Edo-period Japanese culture. His essays have been published in Queer Popular Culture: Literature, Media, Film, and Television and LGBT Identity and Online New Media, as well as other journals.
Dru Pagliassotti is a professor of communication at California Lutheran University in Thousand Oaks and the author of several books.

“this volume, with its cross-cultural approach combined with a strong focus on fannish activities, is certainly a valuable contribution to the [manga studies] movement”—Transformative Works and Cultures; “At last, this collection pries open the last of the closet doors and allows for the analysis of the narratives of gay, transgendered, and intersexual subjects to emerge. Manga have been a unique source and archive of such work, slowly developing what has become a massive, global fan base. Each of the narratives in this anthology takes on a particular facet of the complicated and complex area of culture that surrounds the boys’ love genre, moving the discussion, finally, out into the light of day.”—Frenchy Lunning, editor-in-chief of Mechademia and professor, Minneapolis College of Art and Design; “Boys’ Love Manga is a very welcome contribution to the field of manga and anime studies. It has something to offer in particular to scholars of gender and sexuality, of globalization, and of new media.”—James Welker, Intersections: Gender and Sexuality in Asia and the Pacific. 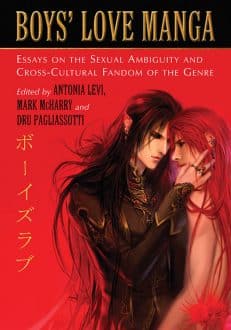