Love, Loss and Resistance in a Nazi Concentration Camp

Originally constructed in the 18th century as a military barracks by Austrian Emperor Joseph II, Theresienstadt (now Terezín) was used as a ghetto and concentration camp by the Nazis early in World War II in their ruse of peaceful resettlement of the Jews of Europe. Tens of thousands of inmates perished at the camp and many more were sent from there to die at Auschwitz and Treblinka. Presented in a two-fold format, this book features the poignant stories of individuals who were transported to Theresienstadt, as related by Holocaust survivor Vera Schiff, whose entire family was sent to the camp in 1942. Following each narrative, Schiff engages in a wide-ranging discussion with ethics professor Jeff McLaughlin regarding the events of the story, within the broader political, religious and cultural context of what is now the Czech Republic.

Vera Schiff is a Holocaust survivor, educator and award winning author living in Toronto, Canada. In 2012 she received an honorary doctorate of Letters from the University of New Brunswick for her contributions to the field. In 2020 she was awarded the Order of Canada for her illustrious career as an author, historian and public speaker who is nationally recognized for sharing her moving experiences of the Holocaust.

Jeff McLaughlin is a professor of philosophy at Thompson Rivers University in Kamloops, Canada where he also serves as chair for the department of Philosophy, History and Politics. 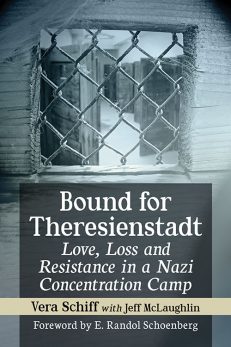 You're viewing: Bound for Theresienstadt $29.95
Add to cart