Born in rural Ohio in 1897, Beryl Halley was educated at a strict Freewill Baptist school. After briefly teaching in a one-room schoolhouse, she joined the navy in 1918 before her unlikely path led her to Broadway, then to the Ziegfeld Follies (1923–1925). She also appeared in Earl Carroll’s Vanities and other revues, as well as in films, and had a widely publicized brush with the law (over alleged nudity) in 1926.
She retired from show business in 1930, married an insurance executive and had a family, later reappearing in the public eye as an officer in the Ziegfeld Girls’ Club. Making her home in Houston in the 1950s, she worked as legal secretary for a large law firm. Her death at age 90 was unpublicized. Her story is told here for the first time. 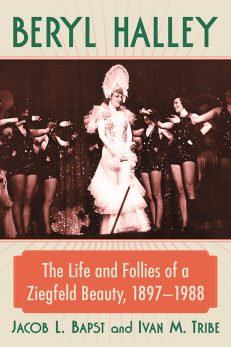