A young German immigrant, Barney Dreyfuss was an American success story in business and in baseball. He fell in love with the game after settling in Paducah, Kentucky, where he discovered he had a knack for assembling good players on the diamond. Relocating to Louisville, he became involved in the professional game with the Colonels. Faced with ouster from the National League, he took his players to Pittsburgh, where he became owner of the Pirates and forged a winning tradition, leading the club to six pennants and two World Series. This first biography of Dreyfuss chronicles the innovative career of the Hall of Famer executive who built Forbes Field—the National League’s first concrete-and-steel ballpark, into which he put $1 million of his own money—pushed for creation of the office of commissioner to govern the game and helped initiate the modern World Series.

Award-winning journalist Brian Martin lives in London, Ontario. He is a member of the selection committee of the Canadian Baseball Hall of Fame and the Society for American Baseball Research.

• “What an absolute pleasure. It was delightful the way Brian Martin presented the life of Barney Dreyfuss, his Pittsburgh Pirates at the beginning of the 20th century, and his early organized baseball exploits so exactly and meticulously.”—Len Martin, creator, Forbes Field: Build-It-Yourself

• “A needed contribution to baseball history….[T]he author makes a strong case for Dreyfuss as a powerful owner and a worthy Hall of Famer.”—Gabriel Schechter, author, Spanking the Yankees: 365 Days of Bronx Bummers 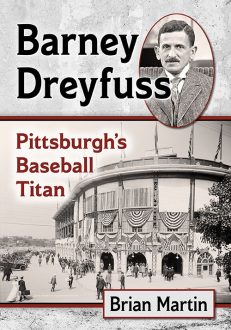