Essays on Themes and Characters of the Series

This collection of new essays focuses on The CW network’s hit television series Arrow—based on DC Comic’s Green Arrow—and its spin-offs The Flash, DC’s Legends of Tomorrow and Supergirl. Comic book adaptations have been big business for film studios since Superman (1978) and in recent years have dominated at the box office—five of the 11 highest grossing films of 2016 were adapted from comics. Superheroes have battled across the small screen for considerably longer, beginning with The Adventures of Superman (1952–1958), though with mixed results. The contributors explore the reasons behind Arrow’s success, its representation of bodies, its portrayal of women, its shifting political ideologies, and audience reception and influence on storylines.

James F. Iaccino is an associate professor of psychology at The Chicago School of Professional Psychology and has written a number of texts and articles on superheroes in film and television.
Cory Barker is a Ph.D. candidate in the Department of Communication and Culture at Indiana University. His writing has appeared in Vox, Complex, The A.V. Club, and other publications. He lives in Bloomington, Indiana.
Myc Wiatrowski is an analyst of business and culture and associate instructor in the Department of Folklore and Ethnomusicology at Indiana University in Bloomington.

Part One: Theoretical Approaches to Understanding Arrow
“I must become something else”: The Evolution of The CW’s Arrow (Lisa K. Perdigao) 11
Reading the Body, Deciphering the Text: Arrow’s Multiliteracies, Superheroics and Merging Multimodalities (Perry Dantzler) 27
The Arrow and His Villainous Counterparts: An Examination of Their Journeys Toward Psychic Transformation (James F. Iaccino) 46

Part Two: Muscles, Scars and Tattoos
Working Out as Creative Labor, or the Building of the Male Superhero’s Body (Juan ­Llamas-Rodriguez) 61
Twenty Percent of His Body: Scar Tissue, Masculinity and Identity in Arrow (Evan Hayles Gledhill) 78
Beyond Wounds and Words: The Rhetoric of Scarred Embodiment in Arrow (Sara K. Howe) 95
The Mark of Cain: Bodies, Belonging and the Bratva (John Carter McKnight) 111

Part Four: Politics and Diversity in Arrow
“You have failed this city”: Arrow, ­Left-Wing Vigilantism and the Modern Day Robin Hood (Antonio Pineda and Jesu´s Jime´nez-Varea) 150
“What, O.J. and Charles Manson weren’t available?” DC Comics, The CW’s Arrow and the Quest for Racial Diversity (Rodney A. Thomas, Jr.) 167 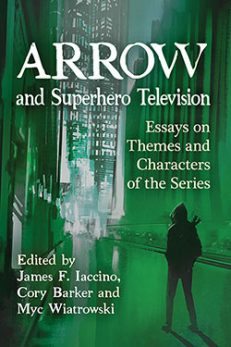 You're viewing: Arrow and Superhero Television $19.99
Add to cart