This detailed study of the career of Anthony Mann argues Mann’s prominence and influence alongside contemporaries like John Ford. Mann (1906–1967), who was active in Hollywood and Europe, directed or produced more than 40 films, including The Fall of the Roman Empire and God’s Little Acre. Best known for his work in the film noir and western genres and his films starring Jimmy Stewart, Mann later moved into Cold War and epic films. The book features a filmography and 49 photographs.

“Darby fills most of the book with close analysis of the films themselves and it is critical to be familiar with them in order to benefit from his intelligent readings and the subtle comparisons he is able to draw across Mann’s oeuvre. As a result of Darby’s seriousness of purpose, his book is a worthy companion to the films, rather than a superficial introduction to Mann’s style”—Berkshirereview.net. 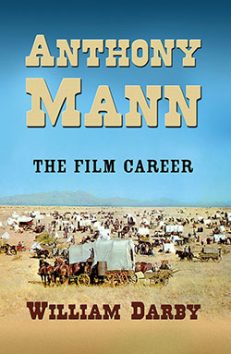