Essays on Connections and Blurred Boundaries

The relationship between humans and animals has always been strong, symbiotic and complicated. Animals, real and fictional, have been a mainstay in the arts and entertainment, figuring prominently in literature, film, television, social media, and live performances. Increasingly, though, people are anthropomorphizing animals, assigning them humanoid roles, tasks and identities. At the same time, humans, such as members of the furry culture or college mascots, find pleasure in adopting animal identities and characteristics. This book is the first of its kind to explore these growing phenomena across media. The contributors to this collection represent various disciplines, to include the arts, humanities, social sciences, and healthcare. Their essays demonstrate the various ways that human and animal lives are intertwined and constantly evolving.

Kathy Merlock Jackson, a professor of communication at Virginia Wesleyan University, teaches courses in media studies and children’s culture. She is the author or editor of eleven books and former editor of The Journal of American Culture. She has served as past president of both the American Culture Association and the Popular Culture Association.

Kathy Shepherd Stolley is a professor of sociology at Virginia Wesleyan University, where her emphasis is applied sociology. She was the school’s first associate dean for innovative teaching and engaged learning. Her scholarship has appeared in various professional journals and she has authored or co-edited six books.

Lisa Lyon Payne is a communication professor at Virginia Wesleyan University, where she focuses on journalism and public relations. She advises the student newspaper and is editor of College Media Review, the flagship journal of the College Media Association. She has authored or co-authored a book and over twenty book chapters and journal articles in the areas of college media, popular culture, crisis communication, reputation management and public relations theory development.

Part II. Relationships: Interactions Between Humans and Animals
From Trauma to Trust: The Convoluted Relationship Between Jews and Dogs Hadas Marcus and Tammy ­Bar-Joseph  97
No Room in the Boat? Pets vs. People in Disaster Relief Efforts (Amy J. Lantinga)  111
Mirrored Caregiving: Chronic Illness in the Human/Animal Household (Terri Kovach)  128
I Told the Dog First: The Delicate Relationship Between Marginalized Youth and Animals (Jeffrey Jin and Katharine Wenocur)  140
Japanese People Adore Their Animals (Jill S. Grigsby)  154
The “Soul” of the Circus: What Animals Under the Big Top Continue to Teach Their Audiences (Mort Gamble)  162

• “Engaging collection of essays… This group of essays should make us think—about our values, our myths, and our assumed place within the animal kingdom. …recommended”—Choice

• “Animals and Ourselves addresses a host of fascinating questions associated with the blurring of the distinction between human and other species. How have TV nature documentaries changed our views of animals? What is fueling the rapid increase in cosmetic surgeries for dogs? Should nonhuman animals be considered persons or property under the law? Can ‘furries’ find happiness through on-line dating services? Do robotic pets make good therapists? This collection of essays offers an eclectic and intellectually satisfying tour of the myriad roles of animals in modern psychological life and in popular culture.”—Hal Herzog, author of Some We Love, Some We Hate, Some We Eat: Why It’s So Hard to Think Straight About Animals 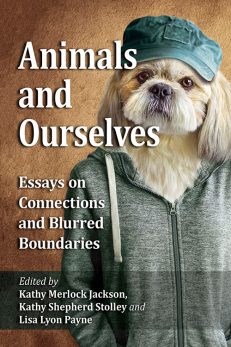 You're viewing: Animals and Ourselves $45.00
Add to cart