Building upon anarchist critiques of racism, sexism, ableism and classism, this collection of new essays melds anarchism with animal advocacy in arguing that speciesism is an ideological and social norm rooted in hierarchy and inequality. Rising from the anarchist-influenced Occupy Movement, this book brings together international scholars and activists who challenge us all to look more critically into the causes of speciesism and to take a broader view of peace, social justice and the nature of oppression. Animal advocates have long argued that speciesism will end if the humanity adopts a vegan ethic. This concept is developed into the argument that the vegan ethic has the most promise if it is also anti-capitalist and against all forms of domination.

Anthony J. Nocella II, professor, author and community organizer, is a senior fellow of the Dispute Resolution Institute at the Hamline School of Law and editor of the Peace Studies Journal. He lives in Durango, Colorado.

Erika Cudworth is a reader in international politics and sociology at the University of East London, United Kingdom, where she teaches political sociology of various kinds and is co-chair of the Feminist Research Group. She lives in London.

Doing Liberation: The Story and Strategy of Food Not Bombs (Drew Robert Winter) 59

“Nailing Descartes to the wall”: Animal Rights, Veganism and Punk Culture (Will Boisseau and Jim Donaghey) 71

Industrial Society Is Both the Fabrication Department and the Kill Floor: Total Liberation, Green Anarchism and the Violence of Industrialism (Mara J. Pfeffer and Sean Parson) 126

“A wider vision”: Coercion, Solidarity and Animal Liberation Will Boisseau 141

Following in the Footsteps of Élisée Reclus: Disturbing Places of ­Inter-Species Violence That Are Hidden in Plain Sight (Richard J. White) 212 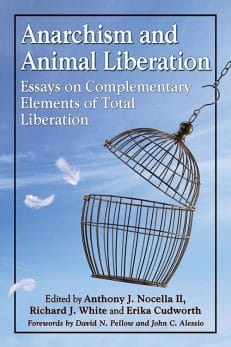 You're viewing: Anarchism and Animal Liberation $29.95
Add to cart