A prolific author, Isaac Asimov is most admired for his science fiction, including his collection of short stories I, Robot and his Robot, Empire and Foundation series novels. While each of these narratives takes place in a different fictional universe, Asimov asserted at the end of his career that he had, with his last Robot and Foundation novels, unified them into one coherent metaseries.
This reference work identifies and describes all of the characters, locales, artifacts, concepts and institutions in Asimov’s metaseries. Mimicking the style of The Encyclopedia Galactica, the fictional compendium of all human knowledge that features prominently in the Foundation series, this encyclopedia is an invaluable companion to Asimov’s science fiction oeuvre.

“full of information…valuable”—The Journal of American Culture; “a treasure trove of characters, places, and terms in the Metaseries”—ARBA. 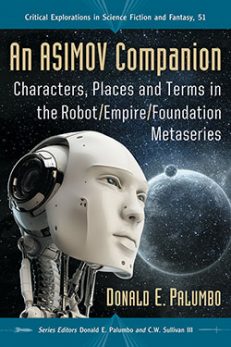 You're viewing: An Asimov Companion $29.95
Add to cart