As the Second World War drew to a close, America’s premier fire apparatus builder—the American-LaFrance Foamite Corp. of Elmira, N.Y.—bet the company’s future on its radical new cab-ahead-of-engine 700 Series fire engines. In a spectacular gamble to capture the superheated postwar market, all of the company’s existing products were discontinued and its customers were essentially told to “take it or leave it.” This bold gamble paid off and 700 Series rigs soon filled firehouses across the nation, sweeping aside all competitors and ultimately defining the breakthrough 700 as “America’s Fire Engine.” This is the first comprehensive history of the game-changing 700. Individual chapters detail not only each of the eight major vehicle types but also the origins, design controversies, manufacturing, and marketing of the 700 and short-lived transitional 800 Series. It includes a meticulously researched registry of every 700/800 series apparatus delivered, supported by many interpretive tables detailing production, specifications and major fire department fleets.

An internationally known and respected fire apparatus historian, Walter McCall has authored 22 automotive history books—twelve of them on fire apparatus. His two encyclopedias on the subject are considered the “bible” of the antique fire apparatus hobby. He has also written numerous articles and features for national and regional fire apparatus and emergency vehicle hobby publications. He lives in Windsor, Ontario.

Growing up a short distance from the Toronto Fire Department’s Yorkville Avenue station made Alan Craig an early fan of the American-LaFrance 700 Series and launched a half century of fire apparatus photography and his 35-year career in emergency services. As a fire service historian, he has spent four decades documenting not only American-LaFrance fire trucks but also the Toronto Fire Department’s motorized fire apparatus, and the Department’s Fire Alarm Telegraph system. He lives in Palm Springs, California. 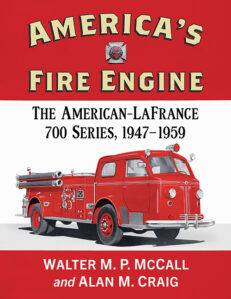