Americans at War in Foreign Forces

The role of Americans in the two world wars is well known, but with a glaring exception—one that reveals a little-known aspect of the common history of the United States and Canada. By the time of the American entrance into World War I in April 1917 and World War II in December 1941, tens of thousands of Americans had already fought and died in those conflicts in the uniforms of other nations.
Most had quietly traveled over the northern border to join the ground, air and naval forces of the Commonwealth nations, others to France, Poland, China and the other nations and armed forces that played a role in the continuing world conflict of the first half of the century. In preceding their own nation to war, they influenced the course of events in those years and, though threatened with loss of citizenship, were ultimately met with the acceptance of their own government. This book tells the story of who these Americans were, why they took the actions they did, their experiences in war, and the effects of their presence as Americans in foreign forces.

Chris Dickon is an Emmy-awarded former broadcast producer whose work develops new information about the human results of Americans at war. He has written about the places where named American war dead are still buried, the role of Americans in the non-American forces of the two world wars, and the social results of U.S. military racial policy and practice in Europe. He lives in Portsmouth, Virginia.

• “The author’s contribution is that he has gathered together information formerly available only in newspaper and magazine articles scattered over a century. His documentation, excellent bibliography, good index, and well chosen photographs are all assets, and a lucid and terse writing style make this an easy, enjoyable read. No other book covers this topic…highly recommended”—Choice

• “Thorough and in-depth…painstakingly researched…Americans at War’s strength lies in its intensely human account of the personal lives and convictions of individuals leaving their home country to fight in the unspeakable horrors of combat. Covering land, air, and sea battles, Dickon weaves an account of little-known Ivy League adventurers, middle class professionals, and outcast mercenaries who risked their lives and citizenships in conflicts where the United States was determined not to participate. … provides a glimpse into the lives of thousands of Americans who signed on with foreign forces to fight in some of the twentieth century’s bloodiest conflicts. … valuable…an important and recommendable glimpse into the heart of an individual fighter’s commitment to the causes he or she believes are righteous.”—Military Review

• “For both the First and Second World War, Dickon provides a first rate discussion of the burial and commemoration of the Americans who served and died in Commonwealth forces…a valuable step…interesting and the prose is very readable. The subject matter is presented in an approachable way, and the author tells the story well, skillfully blending the stories of individuals to describe a broader movement. Many of these stories will be unfamiliar and intriguing”—Canadian Military History

• “Dickon’s book tells a largely untold story, and is very much worth reading for that reason”—The NYMAS Review

• “Tells a largely untold story, and is very much worth reading”—Strategy Page

• “The chronological treatment weaves their stories together in a narrative style, revealing why they enlisted in foreign militaries, their experiences, and their impact on the foreign military”—ProtoView 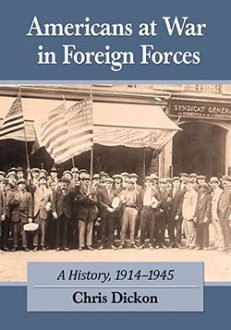 You're viewing: Americans at War in Foreign Forces $39.95
Add to cart