This book provides a single source of biographical information for the thousands of individuals who have held high elective and appointive offices in the federal, state, and municipal governments. The first half of the book lists positions in the government with a chronological record of the persons who have held the positions and the duration of their terms of office.
Executive branch listings include the presidents, first ladies, vice presidents, cabinet members, deputy and undersecretaries of cabinet departments, directors and administrators of high government agencies, high-ranking military officials, ambassadors, and high-ranking presidential staff and White House aides. In the judiciary, the chief justice of the United States and members of the Supreme Court, the U.S. Court of Appeals, and U.S. District Courts are listed. Legislative listings include presidents of the Continental Congresses, speakers of the House of Representatives, presidents pro tempore of the Senate, majority and minority leaders in both houses of Congress, members of Congress, territorial delegates, resident commissioners, governors and lieutenant governors.
Next are sections on state and territorial governments (listing governors and lieutenant governors) and city governments (listing mayors of over 150 cities).
The second half of the book is a biographical index of individuals found in the earlier sections, listed in alphabetical order. The entries contain dates of birth and death, when known, political party or affiliation, state or states of significance to the officeholder, and listing of offices held. 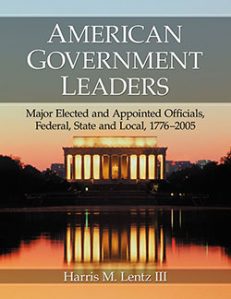