Her Complete 1930 Memoir, with a New Biography and Filmography

Dark-eyed and distant Alma Rubens was one of the first female stars of the early feature film industry in the 1910s. She was a major star by 1920, but before the decade was over her screen career was marked and marred by cocaine abuse. She died in 1931 at age 33—a Hollywood beauty, a casualty of Hollywood “snow,” yet much more. As an actress she was versatile, demonstrating a talent that was ahead of its time with her gentle and subtle expressions.
This book contains Rubens’s autobiography, a text titled This Bright World Again that was serialized in newspapers in 1931. Ghost-written or not or somewhere in between, this long forgotten document deals with Rubens’s addiction and despair. In addition, a new biography of Rubens takes the reader from her birth in San Francisco through an impoverished upbringing, three short-lived marriages, and her career in pictures for Triangle Film, Cosmopolitan, Fox and other production companies. The story of her film career mingles with a tale of desperate drug addiction that led to hospital stays, violence and deception. A filmography lists her credits from 1913 to 1929.

Gary D. Rhodes, a documentary filmmaker, is a professor at the Queen’s University, Belfast. 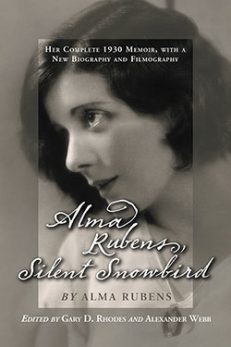