Women in the Wake of Civil War and Reconstruction

Few readers of Margaret Mitchell’s Gone with the Wind remained unmoved by how the strong-willed Scarlett O’Hara tried to rebuild Tara after the Civil War ended. This book examines the problems that Southern women faced during the Reconstruction Era, in Part I as mothers, wives, daughters or sisters of men burdened with financial difficulties and the radical Republican regime, and in Part II with specific illustrations of their tribulations through the letters and diaries of five different women.
A lonely widow with young children, Sally Randle Perry is struggling to get her life back together, following the death of her husband in the war. Virginia Caroline Smith Aiken, a wife and mother, born into affluence and security, struggles to emerge from the financial and psychological problems of the postwar world. Susan Darden, also a wife and mother, details the uncertainties and frustrations of her life in Fayette, Mississippi. Jo Gillis tells the sad tale of a young mother straining to cope with the depressed circumstances enveloping most ministers in the aftermath of the war. As the wife of a Methodist Episcopal minister in the Alabama Conference she sacrifices herself into an early grave in an attempt to further her husband’s career. Inability to collect a debt three times that of the $10,000 debt her father owed brought Anna Clayton Logan, her eleven brothers and sisters, and her parents face-to-face with starvation.

“highly recommended”—Choice; “[this] work is of great value”—The Civil War Courier; “a very detailed and well-written anecdotal narrative”—Civil War Book Review; “well-written…excellent…vivid…author, who has done a great deal of careful research, writes with verve and assurance…straightforward”—The Civil War News; “this work succeeds in illustrating the chaos caused by the social, economic, and political uncertainty and hardship that defined the Reconstruction Era South”—Colorado Libraries. 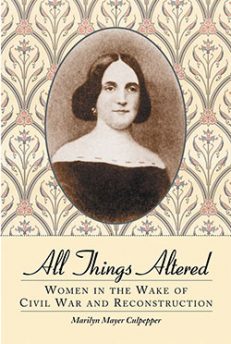