Alcohol in the Writings of Herman Melville

“The Ever-Devilish God of Grog”

In early to mid-19th century America, there were growing debates concerning the social acceptability of alcohol and its consumption. Temperance reformers publicly decried the evils of liquor, and America’s greatest authors began to write works of temperance fiction, stories that urged Americans to refrain from imbibing.
Herman Melville was born in an era when drunkenness was part of daily life for American men but came of age at a time when the temperance movement had gained social and literary momentum.
This first full-length analysis of alcohol and intoxication in Melville’s novels, short fiction and poetry shows how he entered the debate in the latter half of the 19th century. Throughout his work he cautions readers to avoid alcohol and consistently illustrates negative outcomes of drinking.

Corey Evan Thompson has taught at the University of Windsor, St. Clair College, and Canadore College. His scholarly articles can be found in journals including Papers on Language and Literature and American Transcendental Quarterly. He lives in Cornwall, Ontario.

“Thompson’s Alcohol in the Writings of Herman Melville stands as a fascinating and thorough treatment of one of the most neglected subjects in Melville criticism. Thompson makes a powerful case for the ubiquity of alcohol in Melville’s writing and life. With indefatigable research and a sharp critical eye, Thompson has tracked down seemingly every reference and innuendo to alcohol and its social, cultural, and literary effects in Melville. Particularly impressive is his wise approach to “The Melville Question”…whether or not Melville was an alcoholic…by way of focusing on the function of alcohol and alcoholics within his writings, a far more interesting endeavor than engaging it directly and venturing forth a tentative answer. Instead Thompson immerses us in the materials readily available and abundant, yet surprisingly under discussed, of Melville’s own texts. Herein, we discover a richly nuanced study that refuses easy answers to the complex place of alcohol within his writings.”—David Dowling, University of Iowa. 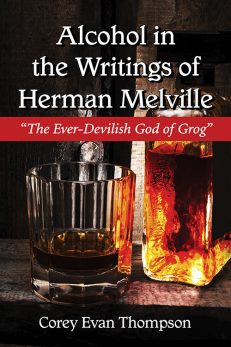 You're viewing: Alcohol in the Writings of Herman Melville $39.95
Add to cart