View cart “African Placenames” has been added to your cart.

Origins and Meanings of the Names for Natural Features, Towns, Cities, Provinces and Countries, 2d ed.

In this useful work, detailing more than 2,500 African placenames of all types, each entry identifies the country and, in most cases, geographical location within the country. An account of the name’s origin and meaning follows, along with appropriate historical, topographical, and biological references. Cross references provide former names, alternate spellings, and alternate forms of current names. An introduction comprises a geographical summary, a chronological survey of the exploration and colonization of Africa, and an overview of African languages.

The late Adrian Room was a noted toponymist and onomastician. The author of more than 50 reference books about words and names, he lived in Stamford, Lincolnshire, England. 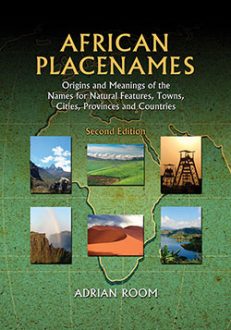