Stephen King’s fiction has formed the basis of more motion picture adaptations than any other living author. His earliest short stories, collected in the Night Shift anthology, have been adapted into hit features including Creepshow, Children of the Corn, Cat’s Eye, Maximum Overdrive, Graveyard Shift, Sometimes They Come Back, and The Mangler. Through his “Dollar Baby” program, King licensed several Night Shift stories to aspiring filmmakers for just one dollar each, resulting in numerous student film adaptations. Although most have never been screened outside of a college classroom, films like Frank Darabont’s The Woman in the Room were eventually released commercially with considerable critical success. Darabont, in fact, would later direct both The Shawshank Redemption and The Green Mile.
This volume critically examines and contextualizes adaptations of the Night Shift short stories, from big box office features to relatively unknown student films. It illuminates how each film is a uniquely and intricately collaborative endeavor, and charts the development of each adaptation from first option to final cut. Through old and new interviews with the creators, it explores how filmmakers continue to reinvent, reimagine, remake and reboot King’s stories.

Joseph Maddrey has researched, written and produced over 100 hours of documentary television, focusing on true crime and the paranormal. He lives in Midlothian, Virginia. 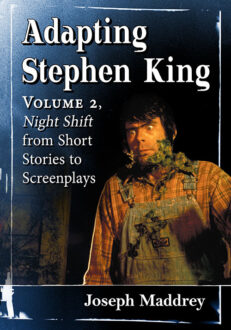