A Pacifist at Iwo Jima

In the 1930s, Rabbi Roland Gittelsohn was a distinguished scholar and vocal pacifist. After the attack on Pearl Harbor, he had a change of heart and volunteered to serve as a chaplain in the US Navy. The first rabbi ever deployed with the Marine Corps, he found himself in the bloody battle at Iwo Jima. At war’s end at the dedication of the 5th Marine Division cemetery, he gave a renowned speech known as “the Gettysburg Address of World War II.”
This biography is based on multiple sources, including Gittelsohn’s personal papers, beginning with his family’s emigration from Russia to the United States. From the growing antiwar movement after World War I, to the training of military chaplains and the anti–Semitism among their ranks, important events further contextualize Gittelsohn’s life, including his illustrious postwar career and service on President Harry S. Truman’s Committee on Civil Rights.

Lee Mandel is a retired U.S. Navy physician. He served at four Navy hospitals, was twice a staff internist at the Office of the Attending Physician, U.S. Congress, and was the Senior Medical Officer aboard three U.S. Navy aircraft carriers. He has published numerous journal articles both in medicine and history. He lives in Suffolk, Virginia. 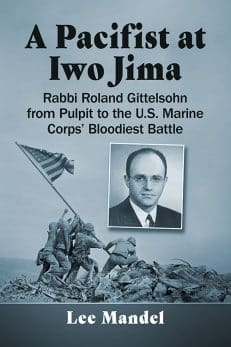