On November 8, 1937, a tourist from California named L. E. Hammond walked onto the campus of Emory University in Atlanta, Georgia, carrying a 21-pound rock he had accidentally stumbled upon in North Carolina. The barely-legible inscription on the rock appeared to be a lengthy message from Eleanor Dare, mother of Virginia Dare, and it was dated 1591. The inscription told of the trials and tribulations endured by the English colonists after their departure from Roanoke Island in 1587.

The authenticity of that stone, commonly referred to as the Chowan River Dare Stone, has remained an open question since its appearance in 1937. Carefully researched and documented, this book finally provides conclusive evidence that the Chowan River Dare Stone is a clever 20th century fraud. In doing so, the book also tells the fascinating story of the Dare Stone and exposes the orchestration of the hoax and its shadowy perpetrators.

Retired educator Brandon Fullam has been researching and writing for over a decade about England’s first attempts to establish a permanent colony in present-day North Carolina. Much of his work has focused on the disappearance of what has become known as the 1587 Lost Colony. He has published two previous books on this topic. His work has also appeared in Lost Colony Research Group and Sampson County Historical Society publications. He is a member of the Virginia Historical Society and the Chesterfield Historical Society of Virginia and lives in Midlothian, Virginia. 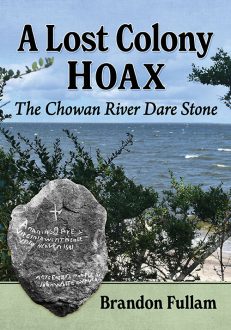