A Century in Uniform

From silents of the early American motion picture era through 21st century films, this book offers a decade-by-decade examination of portrayals of women in the military. The full range of genres is explored, along with films created by today’s military women about their experiences.
Laws regarding women in the service are analyzed, along with discussion of the challenges they have faced in the push for full participation and of the changing societal attitudes through the years.

Stacy Fowler is a technical services librarian and tenured professor at St. Mary’s University Law Library in San Antonio. Her scholarly interests include laws pertaining to women in the military and gender inequity in any form.
Deborah A. Deacon is an art historian and retired U.S. Navy commander who resides in Arizona. She has published numerous articles and books on women artists and war, depictions of military women in film and comics, and Japanese anime and manga. 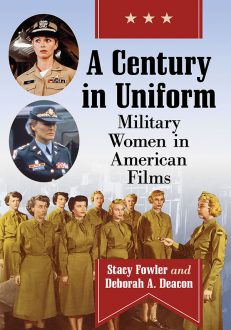