Children at the Border

The Trump administration violated the rights of migrant children who fled brutal violence in the Northern Triangle of Central America. Their rights are human rights. This book explores the administration’s policies and practices of family separation at the U.S. southern border and its confinement of migrant children that, in some cases, experts describe as torture. Specific connections are made between harmful actions on the part of government officials and agencies, and provisions that protect against them in The Convention on the Rights of the Child and four other UN conventions. Awareness of the violations and the safeguards afforded to children may help preserve children’s human rights.

The book also examines efforts of humanitarian organizations, courts, and legislators to reclaim and defend migrant children’s rights. The author’s research includes information from international and national government documents, news reports, and interviews and stories that resulted from networking with advocates in both Arizona and Mexico. The young asylum seekers were called “criminals” and “not-innocent” by the President. However, his narrative is contradicted by vignettes that describe children’s own experiences and beliefs and by photographs of them taken by advocates in Arizona and by the author in shelters in Mexico where families await asylum.

Jo-Anne Wilson-Keenan is a career educator. She has written or co-written nine articles, seven book chapters, and one book. She lives on Cape Cod, Massachusetts. 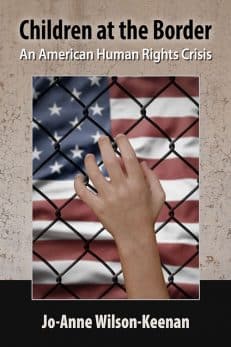 You're viewing: Children at the Border $29.95
Add to cart