More than a billion people watched the 9/11 World Trade Center destruction unfold on television, making it the greatest shared event in world history. Reflecting this fact, the 2003 World Trade Center Memorial Design Competition was open to anyone, drawing 5,201 entries from 60 countries, all of which were posted online.
Most designs were the greyscale hardscape of typical memorials. A few were radically imaginative. Some engaged memory with sound, color, movement, technology or visitor participation. Others reached across the globe, cyberspace, even outer space.
These imaginings stirred questions about their creators. Who were they? What were they thinking and feeling? How did the concept develop? This book, based on a first ever review of the entries, tells the personal stories of more than 180 designers whose creative perspective translated an horrific event, giving deeper thought to the relation of memorial spaces to history, geography, technology and cultural diversity.

Lester J. Levine is a management consultant and poet. He lives in Chapel Hill, North Carolina.

“Recommended”—Choice; “A valuable resource for anyone who seeks understanding of the commemoration and meanings of the attacks on the World Trade Center of September 11, 2001. Lester J. Levine has brought together some 180 submissions deemed to be among the most compelling, commemorating their aims and importance. Levine offers sensible categorizations of the memorial entries that help make sense of this overwhelming body of work, while at the same time giving individual works their due. Seeing submissions that weren’t selected, and learning about their creators through first-hand interviews, we gain a rich sense of 9/11’s impact on ordinary people, and the creative parameters of the memorials of the imagination that are a now crucial part of this event’s historical significance. Written with clarity and empathy, 9/11 Memorial Visions offers new insights into the visual culture of memory in general and the traumas of 9/11 in particular.”—Michele H. Bogart, author of The Politics of Urban Beauty: New York and Its Art Commission; “This fascinating and heartfelt book tells the story of the World Trade Center memorial competition in 2003, a call to re-imagine a site of horrible devastation and death that drew some 5,201 entries in what is considered the largest design competition in modern memory. Levine’s account of their proposals and motivations is a valuable addition to the growing body of literature on memory and commemoration in modern America.”—Erika Doss, University of Notre Dame, author of Memorial Mania; Public Feeling in America; “Too often, discussion of memorials focuses on their physical characteristics. In this book, Lester Levine invesitgates the emotional, motivational, and human impulses behind the competitors’ schemes.”—Jayne Merkel, a New York-based architectural historian and critic. 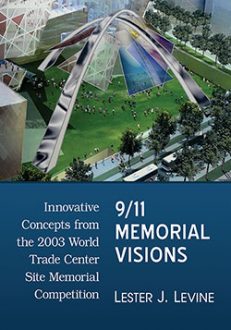