World War I on Film

One of the central events of modern history, World War I has been poorly presented in English language films. Torn between the powerful isolationist movement in the U.S. and a growing hatred of the “Hun,” contemporary films were mainly propaganda calling citizens to arms. The American film industry used the outbreak of the war and the government’s interest in promoting patriotic sacrifice as a means to expand and take the lead in the film industry worldwide.
More a business model than an art form, these early efforts claimed a place of respectability for film among the arts. Twenty years later, though films produced about the war were few, they were technically superior and generally carried conflicting messages about the war’s mission and value, while focusing more on storyline than history. This study of English Language World War I films examines nearly 350 films from 1914 to 2014. Descriptions and critiques of each of the films are included, with stories and details about the actors and directors.

Paul M. Edwards is the founder and executive director of the Center for the Study of the Korean War at Graceland University’s Independence, Missouri, campus. He is a Korean War veteran and author of 13 works on military history. He lives in Independence.

“very well-organized, thoroughly explanatory…excellent”—ARBA; “a unique and indispensible book. Edwards is a Korean War veteran, and his actual military experience gives the book a unique clarity and sincerity…a great achievement.”—Destructive Music; “a timely guide to nearly 350 films produced over a century (1914-2014) and depicting some aspect of the fighting”—Communications Booknotes Quarterly. 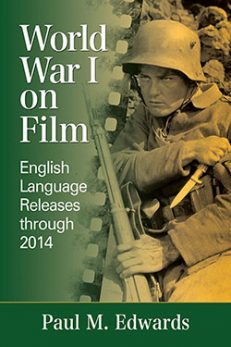