The comic archetype of the Little Man—a “nobody” who stands up to unfairness—is central to the films of Woody Allen and Charlie Chaplin. Portraying the alienation of life in an indifferent world with a mix of pathos, irony and slapstick, both adopted absurdist personas—Chaplin’s bumbling yet clever Tramp with his shabby clothes, and Allen’s fool with his metaphysical witticisms and proclivity to fall in love too quickly.
Both men were auteurs who managed to retain creative control of their work and achieve worldwide popularity. Both suffered from scandals regarding their attraction to younger women. Drawing on psychoanalysis and gender studies, this book explores their films as barometers of their respective historical moments, marking cultural shifts from modernism to postmodernism.

Jill Franks teaches English literature and film at the University of Massachusetts Amherst.

Preface 1
Introduction: Little Men as Tramp and Schlemiel 7
1. Modern and Postmodern Circuses in The Circus and Shadows and Fog 29
2. Technology and Alienation in Modern Times and Sleeper 51
3. Master/Slave Dialectic in The Great Dictator and Zelig 78
4. Getting Away with Murder in Monsieur Verdoux and Crimes and Misdemeanors 99
5. What Is Love in Limelight and Manhattan? 124
6. Nobility and Ambiguity in Modern and Postmodern Endings 149
Appendix: Sex Scandals and the Role of the Critic 161
Chapter Notes 171
Bibliography 185
Index 191

• “5 out of 5 stars. An invaluable guide to the films of Woody Allen and Charlie Chaplin. The first surprising thing about Jill Franks’ new book about Woody Allen and Charlie Chaplin is that no one thought to write it years ago. Given that these two comic giants have dominated movie comedy for over a hundred years, it seems like a no-brainer to compare the two. As Jill Franks demonstrates in her concise and perceptive study, doing so produces a startling array of new insights into the lives, the art, and the artistic and personal evolution of both figures. …Franks organizes her book with elegant simplicity. …An additional surprise of this book is how much intellectual ground it covers. For example, Franks provides an illuminating history of the nature of modernism (Chaplin’s era) and its evolution into postmodernism (Allen’s). She also brings to bear a remarkable number of critical frameworks, including Freudian psychoanalytic theory, Hegelian and Nietzschean philosophy, contemporary feminist thinking and more. The good news is that Franks wears her erudition lightly, and the text is jargon-free and entertaining to read. …Because this book deepens our understanding of these indispensable artists we are in Jill Franks’ debt for—finally—writing it.”—Dan Kamin, author of The Comedy of Charlie Chaplin: Artistry in Motion 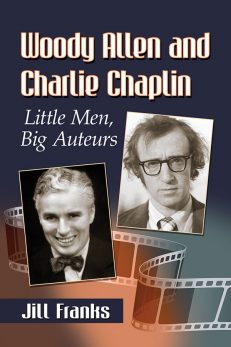 You're viewing: Woody Allen and Charlie Chaplin $39.95
Add to cart