Nearly everyone is familiar with Lucille Ball’s work on screen, but few realize her influence behind the scenes. Fewer still are aware that Judith Waller developed television’s first all-education children’s show, “Ding Dong School.”
Since its beginnings television has been heavily influenced by women, but their contributions are sometimes missing from histories of the medium. In this work, the lives and careers of 15 television broadcasting pioneers (Mildred Freed Alberg, Ball, Gertrude Berg, Peggy Charren, Joan Ganz Cooney, Faye Emerson, Pauline Frederick, Dorothy Fuldheim, Betty Furness, Frieda Hennock, Lucy Jarvis, Ida Lupino, Irna Phillips, Waller, and Betty White) are covered. The focus is on their work in the medium, but there is also discussion of the obstacles they were forced to overcome to reach positions of influence in the industry.

Cary O’Dell is with the film, video and recorded sound division of the Library of Congress. He has worked as an archivist for the Museum of Broadcast Communications in Chicago and for the Library of American Broadcasting at the University of Maryland. He lives in Culpeper, Virginia.

“recommended”—Choice; “this book is well-written, it is easy and delightful to read and it is meticulously documented”—Journalism Educator; “detailed, chronologically presented biographical information about subjects whose lives remain relatively undocumented…quick and useful…clearly presented”—Historical Journal of Film, Radio and Television; “after each essay…a most helpful chronology”—Classic Images. 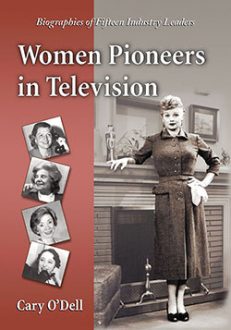 You're viewing: Women Pioneers in Television $39.95
Add to cart