Women of the Western Frontier in Fact, Fiction and Film

This work provides factual accounts of women of the Old West in contrast to their depictions on film and in fiction. The lives of Martha “Calamity Jane” Canary and Belle “The Bandit Queen” Starr are first detailed; one discovers that Starr was indeed friends with notorious bank robbers of the time, including Jesse James and Cole Younger, but was herself primarily a cattle and horse thief. Wives and lovers of some of the West’s most famous outlaws are covered in the second section along with real-life female entertainers, prostitutes and gamblers. Native Americans, entrepreneurs, doctors, reformers, artists, writers, schoolteachers, and other such “respectable” women are covered in the third section.

Ron Lackmann, a retired teacher, has contributed numerous articles to such publications as Screen Greats and Afternoon TV. He lives in Stone Ridge, New York.

4. Prostitutes, Madams and Gambling Ladies of the Wild West     83

“highly readable…a handy resource”—Journal of Women’s History; “recommended”—Public Library Quarterly; “a serious, well researched documentary history of a wide selection of personalities…fascinating contemporary photographs…difficult to put down”—Reference Reviews; “succeeds in providing a general overview of many fascinating women and the challenges they faced in the Old West’s early days”—Film & History; “a lot of eye-opening information…interesting”—Past Times; “entertaining, educational…wow…fascinating…buy this one…I am totally thrilled with the accuracy of information”—Penguin Comics; “fascinating”—Film Review; “excellent”—Big Reel; “should give much reading pleasure”—Wrangler’s Roost; “entertaining”—Wild West. 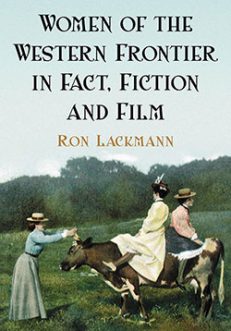 You're viewing: Women of the Western Frontier in Fact, Fiction and Film $39.95
Add to cart