Women of the Resistance

Eight Who Defied the Third Reich

Women took part in perilous resistance missions during World War II alongside a much larger number of male resistance agents. This book presents the lives of eight women who, at profound risk to themselves, chose to challenge the Third Reich. Hailing from diverse regions of the world—the Middle East, Asia, Europe, and North America—the women shared privileged backgrounds of financial and social prominence as well as a profound sense of social justice. As to their deeds with the Resistance, they ranged from forging documents and hiding persecuted Jews to orchestrating sabotage operations and crafting a nonviolent protest movement within Nazi Germany itself. As could be expected, the costs were great, capture and execution among them, but the women’s achievements did succeed in helping to win the war.

Marc E. Vargo is the author of eight nonfiction books and numerous articles in professional journals. He lives on New Orleans’ Northshore.

3. Monica Wichfeld and the Danish Resistance 52

4. Noor Inayat Khan and the Wireless Network of Paris 81

5. Yukiko Sugihara and the Escape of the Polish Jews 106

6. Virginia Hall and the Vichy Underground 124

7. Hannah Senesh and the Palestinian Commandos 157

8. Christine Granville and the Polish/French Resistance 184 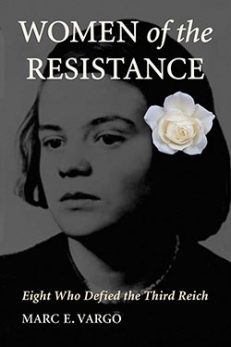 You're viewing: Women of the Resistance $29.95
Add to cart