From the first woman Nobel Peace Prize recipient, Bertha von Suttner (1905), to the latest and youngest female Nobel laureate, Malala Yousafzai (2014), this book in its second edition provides a detailed look at the lives and accomplishments of each of these sixteen Prize winners. They did not expect recognition or fame for their work—economist Emily Greene Balch (1946) was surprised to learn that anyone knew about her. But they did not work in isolation: all met with discouragement, derision, threats or—in Yousafazi’s case—attempted murder and exile. A history of the Prize and a biographical sketch of Alfred Nobel are included.

Anita Price Davis, a North Carolina native, Gold Star daughter, and Duke University graduate, retired as the Charles A. Dana Professor of Education Emerita after 36 years at Converse College, Spartanburg, South Carolina. She is the author of many historical books and articles.

Marla J. Selvidge is a professor emerita at University of Central Missouri. She has written widely on the fields of feminist studies and religious studies. 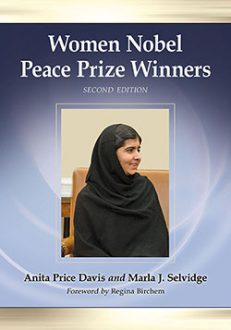