When the movie business adopted some of the ways of other big industries in 1920s America, women—who had been essential to the industry’s early development—were systematically squeezed out of key behind-the-camera roles. Yet, as female producers and directors virtually disappeared for decades, a number of female film editors remained and rose to the top of their profession, sometimes wielding great power and influence.
Their example inspired a later generation of women to enter the profession at mid-century, several of whom were critical to revolutionizing filmmaking in the 1960s and 1970s with contributions to such classics as Bonnie and Clyde, Jaws and Raging Bull. Focusing on nine of these women and presenting shorter glimpses of nine others, this book tells their captivating personal stories and examines their professional achievements.

The author of multiple books on film history, David Meuel has also published two books of poems, more than two dozen short stories, and hundreds of articles on subjects ranging from U.S. national parks to high technology. He lives in Menlo Park, California.

2 • “The eyes to me are everything”: Viola Lawrence’s 47 Years of Seeing into the Eyes of Actors to Convey the Essence of Characters 39

3 • “Boy, was I tough”: The Long Reign and Lasting Legacy of MGM’s Margaret Booth 56

5 • Cutting to the Chase: Dorothy Spencer’s ­Action-Packed ­Half-Century in Hollywood 91

8 • Making the Most of Her Moments: The ­Ever-Adaptable and Always Adventurous Anne V. Coates 139

9 • “The most modest of living legends”: Thelma Schoonmaker and Her Lifelong Artistic Partnership with Martin Scorsese 155 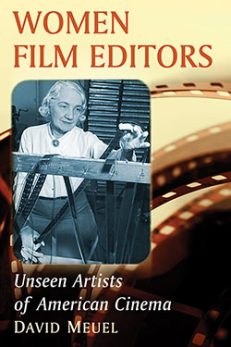