Evidence of Authorship by the Sixth Earl of Derby

Presenting striking new evidence, this book shows that “William Shakespeare” was the pen name of William Stanley, son of the Earl of Derby. Born in 1561, he was educated at Oxford, travelled for three years abroad, and studied law in London, mixing with poets and playwrights. In 1592 Spenser recorded that Stanley had written several plays. In 1594 he unexpectedly inherited the earldom—hence the pen name. He became a Knight of the Garter in 1601, eligible to help bear the canopy over King James at his coronation, likely prompting Sonnet 125’s “Wer’t ought to me I bore the canopy?”—he is the only authorship candidate ever in a position to “bear the canopy” (which was only ever borne over royalty).
Love’s Labour’s Lost parodies an obscure poem by Stanley’s tutor, which few others would have read. Hamlet’s situation closely mirrors Stanley’s in 1602. His name is concealed in the list of actors’ names in the First Folio. His writing habits match Shakespeare’s as deduced from the early printed plays. He was a patron of players who performed several times at court, and financed the troupe known as Paul’s Boys. No other member of the upper class was so thoroughly immersed in the theatrical world.

Retired research scientist John M. Rollett’s interest in the Shakespeare Authorship Question dates from the 1960s, and he has published several papers on Shakespeare in Notes & Queries, a leading academic journal dealing with literature. 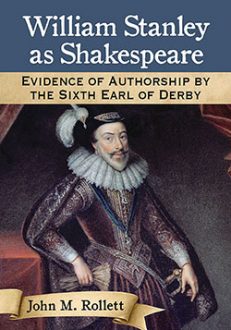 You're viewing: William Stanley as Shakespeare $39.95
Add to cart