William B. Cushing in the Far East

Fresh from success in sinking the Albermarle in the Civil War, the young Captain Cushing was assigned to command the gunboat USS Maumee in Hong Kong to aid the restoration of America’s naval power in Asia. By linking such aims to British policy, and by courting Chinese and Japanese officials, he succeeded in re-establishing American naval and commercial power in the Far East. In his letters to his fiancée, he brilliantly recorded his travels and observations of people and places (and the difficulties of reconciling his naval career with his devotion to her, whom he married in 1870).

The late Julian R. McQuiston was a retired history professor from SUNY Fredonia. He also taught at the University of Columbia and the University of London and was published in many journals, including the English Historical Review.

Acknowledgments  vi
Preface  1
Introduction  3
1. The Challenge of a Paciﬁc Empire  13
2. Cushing Embraces a Fredonia Sweetheart  20
3. Route to the Far East by Sail and Steam to Match
the Power of Ocean Water  34
4. Cruising on the Troubled Waters of the Far East  49
5. From Tropical Heat to Northern Turbulence  85
6. Wandering Among the Crumbling Remnants
of the Celestial Empire  109
7. Imperial Japan  131
8. Surveying the Landscape and the
Inhabitants of Japan  156
9. A Lingering Farewell to the Far East  174
Notes  207
Bibliography  217
Index  220 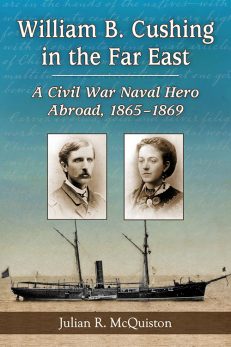