Anatomy of a Horror Film

The 1932 horror film White Zombie starring Bela Lugosi has received controversial attention from film reviewers and scholars—but it is unarguably a cult classic worthy of study. This book analyzes the film text from nearly every possible viewpoint, using both academic and popular film theories. Also supplied is an extensive intellectual history of the predecessor works to White Zombie, as well as information on the significance it carried for subsequent books and films, its theatrical release around the country, its modern cultural influence, and the attempts to restore the film to its original state. Other noteworthy features of this work include an in-depth biography of White Zombie director Victor Halperin, the first complete study of his life and career, and 244 images and photographs.

Gary D. Rhodes, a documentary filmmaker, is a professor at the Queen’s University, Belfast.

Analyzing the Texts and Contexts: White Zombie Under Scrutiny      13

Casting the Mold: The Pre-Halperin World of Voodoo and Zombies      70

Bringing an Independent Film to Life: White Zombie in Production      89

Exhibiting the Land of the Living Dead: White Zombie on First Release      115

Creeping Back from the Grave: White Zombie‘s Modern Cultural Impact      185

Preserving the History: The Restoration of White Zombie      194

Reconstructing a Director: The Life and Career of Victor Hugo Halperin      216

Appendix N: Cast and Credits for Other Victor Halperin Films      295

“exhaustive…[a] massively documented work…deserves to be emulated as a model for single-film scholarship in the future”—C&RL News; “this text represents one of the most important contributions that this publisher often provides to the academic world…a fascinating wealth of thoroughly researched evidence”—Film Quarterly; “detailed…superb…penned with enthusiasm and complete authority…benefits from some exceptionally rare stills and promotional items…fascinating…impossible to imagine how this could be bettered”—Film Review; “exhaustively researched, filled with new information about the film, it’s star, and it’s director. Every aspect of the film is dissected. The book is nothing less than a history lesson. Rhodes’ research is so amazing…[he] should be applauded for giving White Zombie, it’s star, and it’s director the recognition they all so richly deserve. Thanks to [him] generations to come will be able to study Bela Lugosi’s life and work with a detail never before seen in the annals of film history”—Filmfax; “explor[es] every aspect of the film…entertaining…an incredible appendix…fascinating facts and materials…a horror maven’s heaven!! A one-of-a-kind book that leaves you…hypnotized! Rhodes has filled a gap in movie history…magnificent…stunning”—Classic Images; “an exhaustive account…most impressive in its tireless research and impeccable scholarship…the book quickly wins over the reader with its wealth of fascinating information…really comes to life with its biography of director Halperin interwoven with a meticulous reconstruction of his unique but little documented career…it’s a winner”—Little Shoppe of Horrors; “exhaustive detail…a wealth of information”—Pop Matters; “exhaustive…audio commentary is exemplary”—Big Reel; “massive…excellent…loaded with rare stills and illustrations…fascinating reading”—Scarlet Street; “everything you ever wanted to know about White Zombie…is all here and then some…exhaustive…profusely illustrated…the most thorough treatment ever lavished upon a single low-budget genre film…read the book”—VideoScope; “a joy to have and hold…a classic book”—Cult Movies; “outstanding…meticulously research[ed]…delivers everything you’d ever want to know about this cult-classic…an astounding piece of work”—Shock Cinema; “exhaustive…a very fine job”—Science Fiction Chronicle; “definitive”—Interzone; “exhaustive…worthwhile”—The Intelligencer Record. 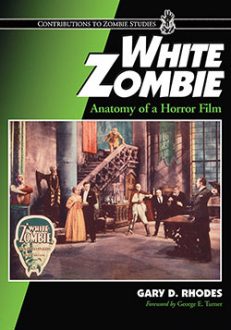