When the “Dead” Rose in Britain

Premature Burial and the Misdiagnosis of Death During the Enlightenment

Through a detailed and fascinating exploration of changing medical knowledge and practice, this book provides a timeline of humankind’s understanding of physiological death. Anchored in Early Modern Britain, it explains how evolving medical theories challenged the ambiguous definition of death, instigating anxieties over the newly realized potential for officials to mistake a person’s time of death. Fears of premature burials were materialized as newspapers across Europe printed hundreds of articles about people who had been misdiagnosed as dead and were then buried—or nearly buried—alive. These stories, tallied in this text, present the first contemporary statistic of how frequently misdiagnosed death led to premature burial during the eighteenth century.

The public consciousness of premature burial manifested itself in many ways, including the necessity of having a wake before a funeral and the creation of safety coffins. This book also explores the folkloric phenomenon of the rising dead and the stories that inspired a number of authors including Coleridge, Byron and Stoker, who blended medical understanding with fiction to create vampire literature.

Nicole C. Salomone is a scholar untangling the centuries-long struggle for medical understanding of death and near-death experiences. She is passionate about the digitization of historical documents and artifacts and using technology to make them accessible to a wider audience. She lives in the suburbs of Philadelphia, Pennsylvania.

Acknowledgments viii
List of Abbreviations xi
Glossary xii
Introduction 1
1. Foundations of Western Medicine and Misdiagnosed Death 9
2. The Function of Anatomy and Physiology in the Seventeenth Century 25
3. The Body, the Soul, and the Diagnosis of Death 50
4. The Burial Process and Premature Repercussions 70
5. The Corpse as a Commodity in a Changing World 86
6. The Medical Community Responds to Misdiagnosed Death 110
7. Nineteenth Century Scholars Weigh In 126
8. The Restless Dead 139
Conclusion 172
Appendix: Source List for Cases of Apparent Death Misdiagnosed as Death 179
Chapter Notes 183
Bibliography 197
Index 211 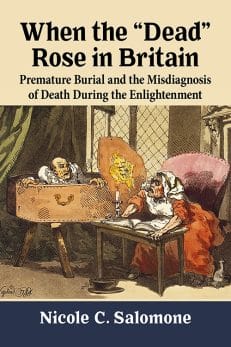