What Is a Game?

Essays on the Nature of Videogames

What is a videogame? What makes a videogame “good”? If a game is supposed to be fun, can it be fun without a good story? If another is supposed to be an accurate simulation, does it still need to be entertaining? With the ever-expanding explosion of new videogames and new developments in the gaming world, questions about videogame criticism are becoming more complex. The differing definitions that players and critics use to decide what a game is and what makes a game successful, often lead to different ideas of how games succeed or fail. This collection of new essays puts on display the variety and ambiguity of videogames. Each essay is a work of game criticism that takes a different approach to defining the game and analyzing it. Through analysis and critical methods, these essays discuss whether a game is defined by its rules, its narrative, its technology, or by the activity of playing it, and the tensions between these definitions. With essays on Overwatch, Dark Souls 3, Far Cry 4, Farmville and more, this collection attempts to show the complex changes, challenges and advances to game criticism in the era of videogames.

Gaines S. Hubbell is an assistant professor of English and writing program administrator at the University of Alabama in Huntsville. His work focuses on the history of rhetoric and methods of game criticism.

Conclusion: Exploring the Ambiguity of Games (Gaines S. Hubbell) 270
About the Contributors 277
Index 281 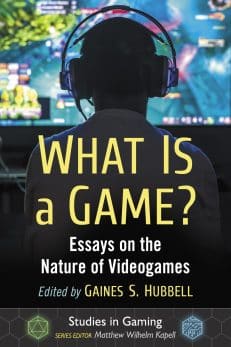