The western genre touched on ideals of honor, conquest, and freedom of spirit, and its stories packed cinemas of the early sound era. This volume covers 30 western film series produced from the mid 1930s to the early 1950s. Included are such long-running series as Hopalong Cassidy, The Durango Kid and The Three Mesquiteers as well as those that had moderate or brief runs like The Singing Cowgirl and The Texas Rangers. Major genre stars like John Wayne, Ken Maynard, Tim McCoy, Buck Jones and Johnny Mack Brown headlined the popular Saturday matinee fare. The book contains a plot synopsis and analysis of each series’ place in cinema history, many photographs and illustrations and a detailed filmography.

Michael R. Pitts has written more than 40 books on motion picture history and entertainment and has also compiled more than three dozen volumes of local history and genealogy. He lives in Chesterfield, Indiana.

“Author Pitts captures the mood of the 1930s, 1940s, and the early 1950s as he describes popular series and explains how stars emerged. Although it was designed to be a ready-reference volume, its narrative strength makes it a good addition to a circulating collection”—Booklist; “profusely illustrated…a welcome and highly prized addition”—Midwest Book Review; “an impressive reference work”—Examiner.com; “a worthy addition to your western bookshelf…excellent writing”—Western Clippings. 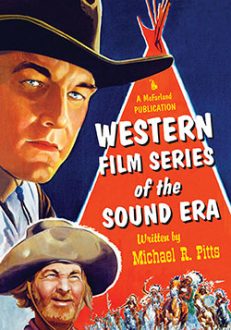 You're viewing: Western Film Series of the Sound Era $45.00
Add to cart