Westerns may have had their heyday, but they remain popular. The greatest films from 1914, when The Squaw Man and The Virginian were among the genre’s best, through 2001, when American Outlaws and Texas Rangers were tops, are the subject of this work.
For each year, the author names the outstanding western films in the following categories: picture, screenplay (original and adaptation), direction, cinematography, music, male and female leading roles, and male and female supporting roles. Also for each year, the author lists the westerns that received Academy Award nominations (and those that won), makes note of the births and deaths of notable actors, directors, producers, composers, cinematographers, authors and other such personalities, and describes the genre’s significant achievements.

Henryk Hoffmann was born in Poland. He teaches Latin and German at the Perkiomen School in Pennsburg, Pennsylvania, where he also coaches soccer and oversees the editorial staff of the school magazine. An active member of the Western Writers of America, he lives in Lititz, Pennsylvania. 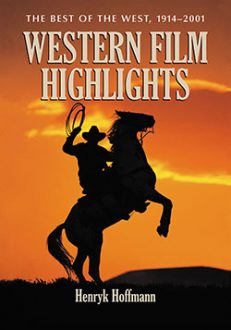