﻿ In its revised and updated fourth edition, this exhaustive encyclopedia provides a record of casualties of war from the last five centuries through 2015, with new statistical and analytical information. Figures include casualties from global terrorism, the wars in Iraq and Afghanistan, and the fight against the Islamic State. New entries cover an additional 20 armed conflicts between 1492 and 2007 not included in previous editions. Arranged roughly by century and subdivided by world region, chronological entries include the name and dates of the conflict, precursor events, strategies and details, the outcome and its aftermath.

Micheal Clodfelter is an active member of Vietnam Veterans Against the War and the author of several books on military history. A researcher and consultant for the Dupuy Institute of Military History, he lives in Lawrence, Kansas.

﻿Table of Contents
in Brief

A Note on the Statistics xix

Reviews of Previous Editions: “the scope is far broader than many…recommended”—Choice; “recommended…significantly revised and updated…more overall coverage [than the competition]…excels in modern coverage…useful”—Booklist; “masterful…excellent”—C&RL News; “most helpful”—College & Research Libraries; “belongs in the reference collection of almost every library…very well-organized…recommended”—ARBA; “in scope, readability, and detail, this volume is one of the finest references to warfare and conflict”—Journal of Peace Research; “massive amounts of data…complete a picture as ever published of the tremendous toll that war has exacted upon modern man…recommended”—Reference Reviews; “a comprehensive compendium…no conflict is left out…statistical masterpiece”—VFW. 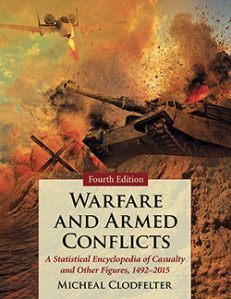 You're viewing: Warfare and Armed Conflicts $295.00
Add to cart