Ethics and Propaganda in Comics and Film

Superhero adventure comics have a long history of commenting upon American public opinion and government policy, and the surge in the popularity of comics since the events of September 11, 2001, ensures their continued relevance. This critical text examines the seventy-year history of comic book superheroes on film and in comic books and their reflections of the politics of their time. Superheroes addressed include Batman, Wonder Woman, Spider-Man, Superman, the Fantastic Four and the X-Men, and topics covered include American wars, conflicts, and public policy.

Marc DiPaolo is an assistant professor of English at Southwestern Oklahoma State University. He has written books on Jane Austen and on environmentalist science fiction and fantasy. DiPaolo has been interviewed on NPR, BBC4, and appeared in the AMC documentary Robert Kirkman’s Secret History of Comics. 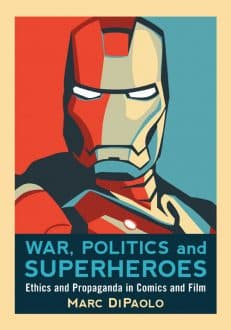 You're viewing: War, Politics and Superheroes $29.95
Add to cart