Composer Richard Wagner (1813–1883) likely suffered from a manic-depressive disorder but in his time very little was known about mental illness, and suicide was not a topic for general discussion. Wagner was often plagued by extreme mood swings; he used his operas, especially the librettos, to express himself and his personal difficulties.
This investigation of the suicidal themes in Wagner’s life and operas—Die Fliegender Holländer, Tannhäuser, Lohengrin, Tristan und Isolde, Die Meistersinger, the Ring cycle, and Parsifal—shows how manic-depressive illness, particularly the depressive part of it, affected Wagner’s life and art. It also analyzes the influence of Giambattista Vico’s theories of cycles (and how these theories appeared in Wagner’s work), suicide as a theatrical and operatic phenomenon, and the way in which the theme of suicide has appeared in other works of the literary and performing arts.

John Louis DiGaetani, an English professor at Hofstra University, is the author of numerous books about opera and theater.

3 Tannhäuser: The Artistic Personality and Suicide      37

4 Lohengrin: The Dream Persona from Another World      55

“quite a lot to admire about this book”—Opera Quarterly; “thoughtful, readable, and informative book…interesting throughout”—Wagner Notes. 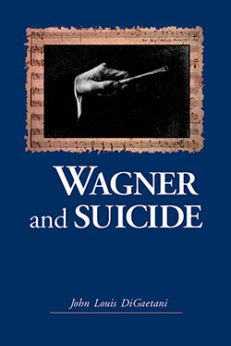