A CH-47 Crew Chief During the Tet Offensive

Like many other young men during the Vietnam War, Ed Corlew enlisted in hopes of having some influence regarding assignment–safety and training. Instead he found himself in the dangerous door gunner position and, soon after, the crew chief aboard a CH-47 Chinook, 15 miles from the DMZ in 1967 and 1968. Assigned to the famed 1st Cavalry Division, Corlew was shot down three times: in the Battle of Hue, the Battle of Quang Tri, and the A Shau Valley. This memoir began both as a journal and as counselor-recommended therapy for PTSD. He earned four bronze service stars for his service (an estimated 1000 flying hours) during the war’s bloodiest year, enduring enemy mortar and rocket attacks. Engaging, frank, and full of action, Corlew describes his many combat experiences as well as the emotional effects–all through the lens of his Christian faith.

Before retirement Edward Corlew was a general contractor and real estate broker developing commercial and residential projects. He lives in Gallatin, Tennessee. 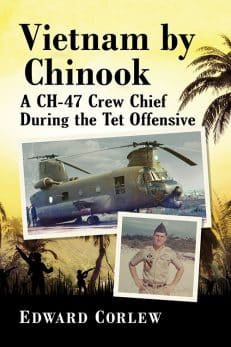