Uniform Numbers of the NFL

Football is a game of numbers—fourth and inches, the three-man rush, a two point conversion, first down. Even with the obvious numbers in the statistics, rules and game situations, the players’ uniform numbers themselves have become part of professional football and its lore. NFL players, like modern-day gladiators, are fitted head-to-toe in protective gear, obscuring even their faces from their most loyal fans. They have become largely identifiable through their uniform numbers. You cannot conjure up Larry Csonka without seeing the number 39 crashing through the line of scrimmage, or recall Lawrence Taylor without imagining the fear his 56 inspired in opposing quarterbacks.
This comprehensive reference work lists all 32 current franchises of the NFL and includes brief team histories, statistics and interesting facts. Each chapter ends with an all-time numerical roster listing the numbers 1 through 99 (in some cases beginning with 00) and everyone, from Hall-of-Famer to replacement player, who has ever worn the corresponding number for that club. Four appendices are included.

John Maxymuk is a reference librarian at Rutgers University, living in Cherry Hill, New Jersey. He has written poetry, book and movie reviews, travel pieces, feature articles in magazines, library-related articles in academic journals, and organizational newsletters. He has been the internet columnist for The Bottom Line: Managing Library Finances since 1997 and was the issue editor for the Notable Documents issue of Journal of Government Information for 10 years. He is listed in Contemporary Authors and in Who’s Who in America.

“comprehensive…unique and wide-ranging…easy to use and would delight any diehard football fan…recommended”—Library Journal; “unique”—ARBA; “greatest resource was the bible of NFL numerology Uniform Numbers of the NFL. The tome, written in 2005 by Rutgers reference librarian John Maxymuk, is a comprehensive numerical directory of every player to wear an NFL uniform through 2005, Maxymuk chose his all-time team by numbers, though we differ with some of his picks. That’s what makes it fun”—SI.com. 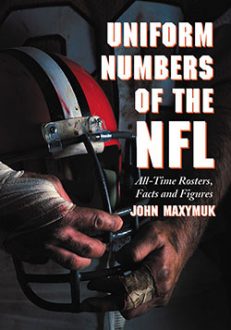 You're viewing: Uniform Numbers of the NFL $39.95
Add to cart