Underage and Under Fire

Accounts of the Youngest Americans in Military Service

This work tells the personal stories of boys and girls who left home and enlisted in the U.S. military at ages 11 to 16. Many had difficult home lives, some wanted adventure or a better future, but all wanted to serve their country. They missed high school proms, adolescent years with family and friends, homecoming parades, and graduation ceremonies. They served aboard ships and submarines, on airplanes, and at faraway bases and battlefields. Some became prisoners of war. Many performed above and beyond.
Jack Lucas earned the Medal of Honor at Iwo Jima six days past his 17th birthday. Calvin Graham enlisted at age 12 and was wounded at Guadalcanal aboard the USS South Dakota. His story was made into a movie starring Rick Schroder. A 13-year-old girl enlisted but was later discovered and sent home from Europe. General Eisenhower told her, “Go home and grow up, little girl, we need more soldiers like you.” One underage veteran became a senator, another, a governor, still another a Chief of Naval Operations. This book reveals why and how they got in, and what happened to them when they were there.

Allan C. Stover used a forged birth certificate to enlist in the U. S. Coast Guard at age 14 during the Korean War. After an honorable discharge at age 18, he served on a Great Lakes ore carrier. Despite never having earned a high school diploma, he earned two college degrees and is a registered professional engineer. He is the founder of the Veterans of Underage Military Service and is a member of American Legion Post 347 and Korean War Veterans Post 169. He lives in The Villages, Florida. 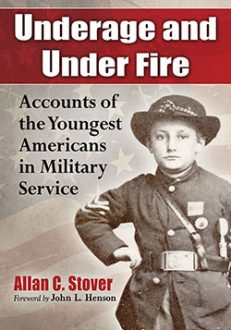 You're viewing: Underage and Under Fire $29.95
Add to cart